This will only be my fourth blog post of the 2016 school year; I haven’t just been lazy but more so comatose. “Write a blog post” was added to my To Do List back in June, so you can see why I am regularly checking for a pulse. That’s something I haven’t done since my son was a teenager. It’s certainly not that I have nothing to say, I always have a lot to say. So, what has been the problem? 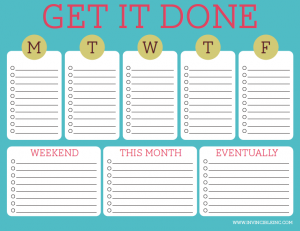 This printable To Do List (https://invincibleinc.wordpress.com/2011/11/30/printable_todo_list/) is clearly missing a NEVER column.

I think I finally have an answer. The mere fact that so many schools have an eLearning Manager (I only use this because “Full Time Multi-Tasking Tech Ninja” is not an actual job title. Note to self, must get that on a T-Shirt) is an admission of failure. If the much hyped Digital Education Revolution had succeeded, I should be back teaching History full time. More on that later. The reality is that I’ve become an actual “Jack of all (Tech) Trades” and consequently master of none. I frequently research tools for colleagues, trial them, pass on the key information and … repeat! I regularly visit classrooms to troubleshoot tech problems. My role has led to me having a little bit of knowledge about 100s of tools but few that I have mastered.

Given the necessary authority (… All Hail Imperator Simonus,) I would be insistent upon all teachers having the same digital toolbox. This would comprise six or eight tools that every teacher masters and uses in their classroom. We are forever reading about standardised tests and general capabilities for students. Surely this standardisation should also extend to the digital capabilities of teachers. But I already know the type of objections I would hear, “I’m a Maths teacher, why do I need to know how to screencast?” I know because I actually received this comment.

This term I have returned to teaching an Ancient Studies class and I’m far from comatose there; it looks more like caffeine fuelled hyperactivity. I suspect it is in part about using technology to increase the engagement of students with whom I’ve built a personal relationship. My first moves into technology came out of a passion to improve my teaching … if only you could teach passion to others! Still, like all good emperors, I will continue to build my empire,  protect the citizens and repel the barbarians at the gate. But, for now, I’m off to cross this post of my list. Another post soon … maybe!

I know it’s Vespasian … But I can see the resemblance.

As some of you would already know, I made a “tree change” last year and headed to the Barossa Valley. As the new eLearning Manager in my school, one of my first initiatives was to set up a fortnightly “newsletter” in the form of a Weebly created site. Each issue contained five items; no more and no less. There was, what I believed to be, an appropriate mix of topics; the latest theory or trend, new apps, video tutorials and a regular “How To…” column. This was an attempt to give teachers the opportunity for some regular professional learning “at leisure.” All the feedback was positive and I saw no reason not to continue in 2016.

For Weebly Pro Users there is the opportunity to access detailed analytics of your website traffic. In the first term this year I noticed that the readership of the newsletter had fallen away dramatically; to as little as five percent of the teaching staff. I wasn’t particularly miffed but did want to know the reasons for the drop-off. I brought up the matter at a committee meeting and I was certainly bemused by the three reasons I kept hearing in various forms …

To me they each seemed like a version of that same old excuse which has long made me bypass miffed and go straight to “bl**** angry.” It surely can’t be acceptable any longer to say “I haven’t got time for this.” 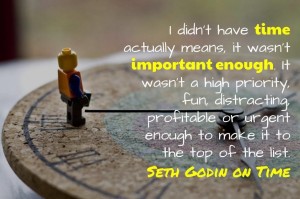 Pleasingly, it didn’t take me long to come up with an alternative; a Tip of the Week in poster form, created in the excellent Piktochart. (Hell, people can even print it if they want to!) I really enjoy the design process and so I’m happy to do this … in that sense at least. But seriously, how effective can it be to deliver bite-sized professional learning!

*If you would like to use or just check out my first two tips, just use the links below: 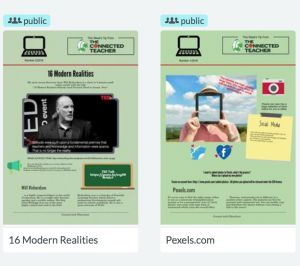 Four years ago this month, my wife and I purchased a house in Australia’s iconic Barossa Valley. For the overseas, uninitiated reader, the Barossa is unquestionably the nation’s best known wine producing region. We were attracted to the idyllic scenery, the wine (well, of course) and most especially the small historic town of Angaston; population 1909. (Or maybe it’s now 1911.) 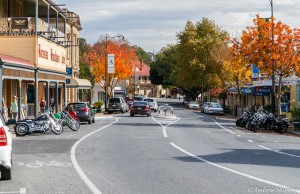 As much as we were keen to take up immediate residence, we had to wait for our two children to …

Thankfully, our daughter is now pursuing a career in theatre (she was always a Drama Queen) whilst our son has a girlfriend (he doesn’t know how!) and has completed an engineering degree (we don’t know how!)

Not long after we purchased our house, the very first iPad appeared and my career as an educator underwent an unexpected transformation. At 55 years of age with 33 years in the classroom behind me, I am an unlikely iPad Ed Evangelist. (Thanks Branchfire for labelling me as such, I do like a title.) Earlier this year when I announced on Twitter that we would be moving to the Barossa I was pleased though not surprised by the assistance I received. My South Australian tweeps were quick to offer advice, links to job websites and even the offer of a “Welcome Reception.”

The process to register as a teacher in South Australia was reasonably straight forward and indeed my biggest concern … “Who’s going to employ someone who is 55?” A colleague in the Barossa advised me, via Twitter, that a position would be available at his state high school in 2015. I firmly believe that I was given an interview because I was a “known figure” on Twitter. I’ve invested many, many (my wife would say too many) hours in Twitter. Over the past two and a half years I’ve amassed in excess of 2500 followers; all of them a part of the educational sphere. This has led to me being offered the opportunity to present at conferences and to write for more than one magazine. I was honestly “blown away” to be offered the job; especially after more than 25 years in Catholic education. Yet, astonishingly, within the next half an hour, I was offered interviews at two further schools. (Way to confuse a man and simultaneously boost his already hugely over-inflated ego!)

I declined one of these offers on the simple basis of distance; I didn’t want a 100 kilometre round trip each day. The other I gladly accepted. When I arrived at that interview, I recognised the Acting Principal and the panel chair as another member of my PLN. The interview was certainly exhaustive at nearly one and a half hours but it was a great experience to talk with like-minded individuals who share my EdTech enthusiasm. Later that same day I was offered and accepted the position for 2015 and 2016. I was flattered to be told, “we were so excited when your application came in. We recognised you.” Within hours, several members of the staff had followed me on Twitter after hearing of the appointment. 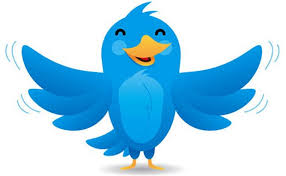 So, thank you Twitter. Thanks to being a self-professed “big deal” on a social media network, I will be assuming the newly created position of eLearning Manager at Faith Lutheran College in Tanunda. My only genuine concern now is if I will be able to live up to the Twype (it’s my new word for Twitter Hype!) in the real world of a new school.

PS: Damn and blast … Twype is already in the Urban Dictionary to describe the “excessive hype built up around the Twilight saga.” Well, that’s done now, Edward creeped me out and Bella was so “wet!” They don’t need the word anymore, so it’s mine.